It’s a rivalry as old as time itself. In a series that dates all the way back to November 30, 1893, this is a rivalry in every sense of the word.

Thanksgiving has come and gone, we’ve all filled our stomachs with turkey, dressing and all of the fixings. Now, it’s time for the State of Alabama to push the leftovers to the side and clash in the 86th chapter of the fiercest rivalry in college football, the Iron Bowl.

The Tide may have washed over the Southeastern Conference’s Western Division and the Tigers may have lost their grip on their prey two weeks in a row, but as history has shown, anything is possible when it comes to these two cross-state rivals.

It separates brothers, mothers, fathers, boyfriends, girlfriends, husbands and wives, even if only for a few hours.

This rivalry has seen it all through the years. Bo’s gone over the top, the game has been won in a literal second, Cam ran all over Alabama in the second half, and so much more. Aubie has even mocked the legendary Bear Bryant in the past.

If you put these two in a room together, you’re bound for a fight. That’s exactly what we will have on our hands on Saturday, November 27, 2021, when the Tide and Tigers are locked inside one proverbial cage and only one will emerge victorious.

In a rivalry of twists and turns, the blood of these two teams is boiling and Saturday, the pot will no longer contain the bad blood between these two.

It’s the Iron Bowl in the 86th chapter, what will happen? Find out at 2:30pm tomorrow on CBS!

It’s been 17 years since Tallassee and Wetumpka have met on the gridiron. The Tigers will travel to Wetumpka’s Hohenberg Field on Friday for their first meeting since 2003.

A Look at the Gridiron Series

The last meeting between the two programs was played at Tallassee’s J.E. “Hot” O’Brien Stadium, with Coach Kyle Glover and the Indians pulling away from Coach Phil Lindsey and his Tigers, 52-7.

At the time of the meeting on August 29, 2003, Coach Kyle Glover was just entering his third year at the helm of Wetumpka, while Coach Phil Lindsey was entering his second season in charge of the Tallassee Football program.

The last meeting between the crosstown rivals in Wetumpka came on August 30, 2002, when Wetumpka claimed a 44-6 victory over Tallassee.

A Look at the Opponent’s Last Game and History

Last week, Tallassee fell to the Reeltown Rebels 27-21 in overtime during the Tigers’ season-opener at J.E. “Hot” O’Brien Stadium.

The Tigers are led by ninth-year head coach, Mike Battles Jr., during his coaching tenure across the Tallapoosa River, Battles is (60-31) with six playoff appearances and a (5-6) record in those postseason appearances with the Tigers.

Overall, in 24 years as a high school head football coach in the State of Alabama, Mike Battles Jr is (177-86).

A Glance at Wetumpka’s Last Game and History

Wetumpka opened the season with a 40-10 loss to rival Prattville at Montgomery’s Cramton Bowl in the second game of the AHSAA’s Kickoff Classic.

The Indians are led by ninth-year head coach Tim Perry. Prior to coming to Wetumpka in 2012, Coach Perry led the Alabama Christian Academy Eagles from 1985 to 2000.

During his 14-year tenure at Alabama Christian, he led the Eagles to a (73-73) record, including six trips to the postseason.

In 2007, Perry joined the staff at his alma mater, Harding University. In 2010, he took over at Nashville’s AR, where he remained for two seasons.

In 2012, Perry returned to the State of Alabama, as the head coach at Wetumpka where he has since remained.

During his tenure at Wetumpka, Perry has led the Tribe to a (59-38) record including seven-straight postseason appearances.

Kickoff between the Tallassee Tigers and Wetumpka Indians is scheduled for 7 p.m. at Hohenberg Field.

Although this one was under different circumstances, it will still stand the test of time.

When Zakoby McClain took the football off of an Alabama receivers hands, and returned it 100 yards to the end zone, everything slowed down and I was taken back to 2013.

All I could think about was: “Wow, I wonder what Rod Bramblett is saying now. What would he say if he was still behind the microphone?”

It was absolutely insane. When I got home, I was discussing the game with my brother’s girlfriend, and we were talking about the pick-six. She said “I wonder how he caught that.” I replied, “He didn’t, Rod had a hand in this one.” Her voice got shaky and she replied “He was watching over us.”

Say what you want about the Iron Bowl but when it comes to historic moments, there is nothing like the Iron Bowl. 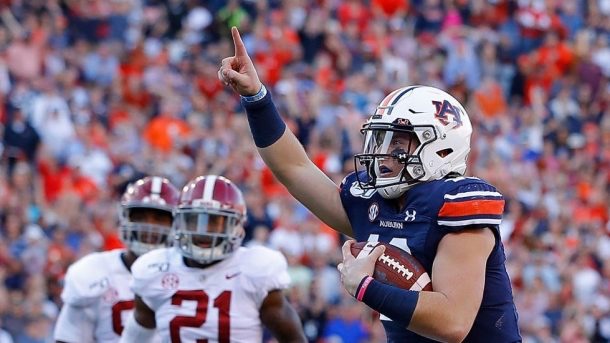 It needs no introduction, it’s the one time a year where families can’t get along, friends become enemies and enemies become friends.

And it’s all because of one thing around the State of Alabama, bragging rights. People talk about this game 24/7, 365 and everybody across the state is tuned into the same game at the same time, every year.

It’s all the bad blood between these two bitter rivals that makes this game what it is. Not to mention the amount of memorable moments from this game that have stood the test of time.

Teams often claim to have a better rivalry than Alabama, Auburn and the Iron Bowl, but the Iron Bowl is quite clearly the most-bitter, most-historic rivalry in the nation, and anybody from the South will tell you that same thing if you ask them.

Sure, there are rivalry games that have been played more than the Iron Bowl, but when it comes to historic moments, nothing comes close to touching the Iron Bowl.

These two teams simply hate each other, absolutely no love is lost, it’s the one game a year where you can throw everything including the kitchen sink out of the window as you travel down the road, so you can watch it shatter.

Over the past 83 years the Iron Bowl has emanated from several different places and cities around the state. Those places include, Birmingham’s Legion Field, Montgomery’s Cramton Bowl, Tuscaloosa’s Bryant-Denny Stadium, and Auburn’s Jordan-Hare Stadium.

But something will be a little different this year, for the first time since 2002, the iconic golden voice of Rod Bramblett won’t be heard over the radio waves.

Instead, Rod’s best friend Andy Burcham will have the call alongside Stan White on the Auburn Sports Network.

This game is bound to have its own historic moments I’m sure, so prepare yourselves, we’ll have our hands full Saturday at 2:30pm CT in the 84th Iron Bowl.