Auburn Baseball found itself facing adversity late in the 2019 season, they could’ve thrown in the towel or waved the white flag but they never did. Auburn’s historic run to the 2019 NCAA Baseball College World Series in Omaha, Nebraska began back early 2019 and the team ran into some bumps in the road along the way. Their run began with a 6-5 win over Georgia Tech in the Atlanta Regional, in which they defeated Coastal Carolina once and Georgia Tech twice to win the regional. The first meeting with Georgia Tech in postseason play sparked it all. Steven Williams’ incredible walk-off homer at Russ Chandler Stadium lit a fire under the Tigers. A fire, which they carried with them from that point on. Knocking off North Carolina in the Chapel Hill Super Regional, a best-of-three series that Auburn won 2-1. Sunday night, the Tigers lost an absolute heartbreaker to Mississippi State 5-4 in the first game of their trip to Omaha. On Tuesday, Auburn tangled with the Louisville Cardinals but the game would enter a weather delay and wouldn’t resume until 11:00 a.m. Wednesday morning. When the game resumed, the Tigers found themselves in a bit of a hole, down 4-1 entering the fifth inning. The Cardinals would tack on one more run and the Tigers would answer back with two runs of their own. The last of which came on a ninth inning home run. Louisville would go on to win 5-3. Say what you want, but this team and this season will live forever. Auburn never gave up even when they had the opportunity to do so. They didn’t back down. The unity that this team showed was absolutely incredible. Rod and Paula Bramblett are without a doubt beaming with pride as am I. This season was one to remember. 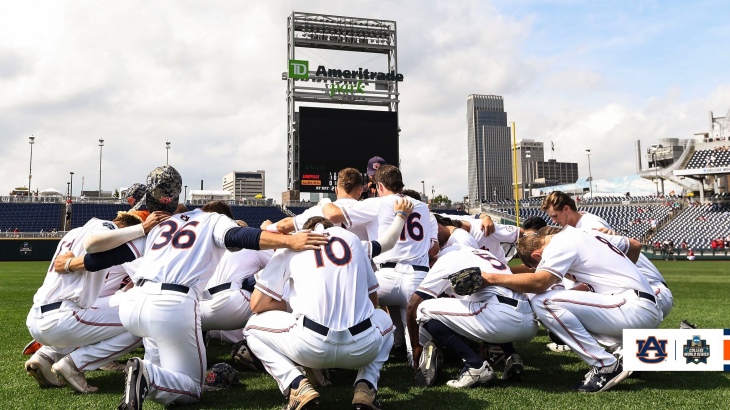 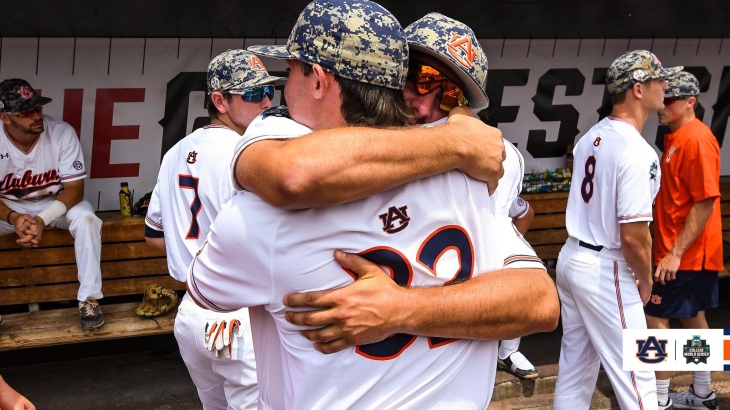 Auburn’s 2019 season has been filled with thrilling wins and heartbreaking losses and this team and university has had their faith tested. Many times in the past teams have gone to Omaha under unlikely circumstances, but this trip? There’s only one word to describe it…incredible. Honestly, I’ve never seen a team rally around each other like the Auburn Baseball team has done the last few weeks. They’ve faced adversity and have never backed down from a fight. The same was true Monday afternoon as the Tigers used a 13-run first inning and ran through the North Carolina Tar Heel bullpen rapidly, as they used four pitchers before the first inning was over and Auburn sent 17 to the plate in the top-half of the first, an inning that lasted nearly 50 minutes, 49 to be exact. The Tigers continued to grit their teeth at run fearlessly toward Omaha in a 14-7 win over North Carolina Monday afternoon. This is Auburn’s fifth trip to Omaha in program history and first since 1997, when David Ross sent Auburn to Omaha with a win over Florida State in the Super Regional. The 22-year drought is over and there’s a party at Toomer’s Corner.

What’s Next for Auburn? 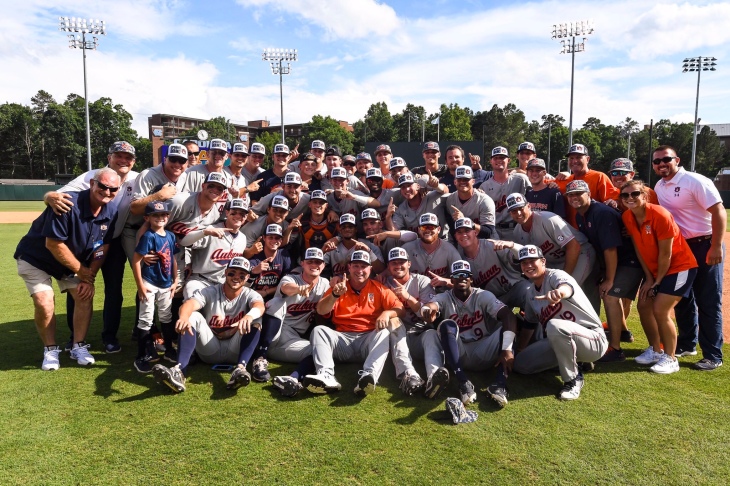 NCAA Baseball Regionals are behind us. Now, we are faced with Super Regional best-of-three game series’ in multiple locations. Ole Miss will travel up to Fayetteville, Arkansas to take on the Razorbacks in the Fayetteville Super Regional, beginning June 8th at noon ET. Auburn will travel to Chapel Hill, North Carolina to take on the North Carolina Tar Heels at noon ET on June 8th. LSU will remain in Baton Rouge and play host to the Florida State Seminoles beginning June 8th at 3pm ET and Mississippi State will remain in “Stark Vegas” aka, Starkville, Mississippi and host the Stanford Cardinal June 8th at 3pm ET. In Nashville, Tennessee, the Vanderbilt Commodores will battle the Duke Blue Devils beginning June 7th at 5pm ET. As a whole, the Southeastern Conference will send six of the 10 teams that advanced to the postseason NCAA Tournament to Super Regional action. For those of you wondering if that’s some kind of record, you would be right. The Southeastern Conference is the first conference in college baseball history to send six teams to the Super Regionals. One again, the SEC has proven its dominance and displayed its resiliency as it does in seemingly every sport all year long. This conference is without a doubt the best conference in college sports. Say what you will, but the Southeastern Conference always delivers when the stakes reach their highest point. Which SEC teams make the trip to Omaha and will they be facing a conference foe? When it’s time to step up, the Southeastern Conference seemingly always comes out on top. Personally, I like the conference’s chances of two teams reaching Omaha and the championship game. Will an SEC team be on top of the college baseball world? 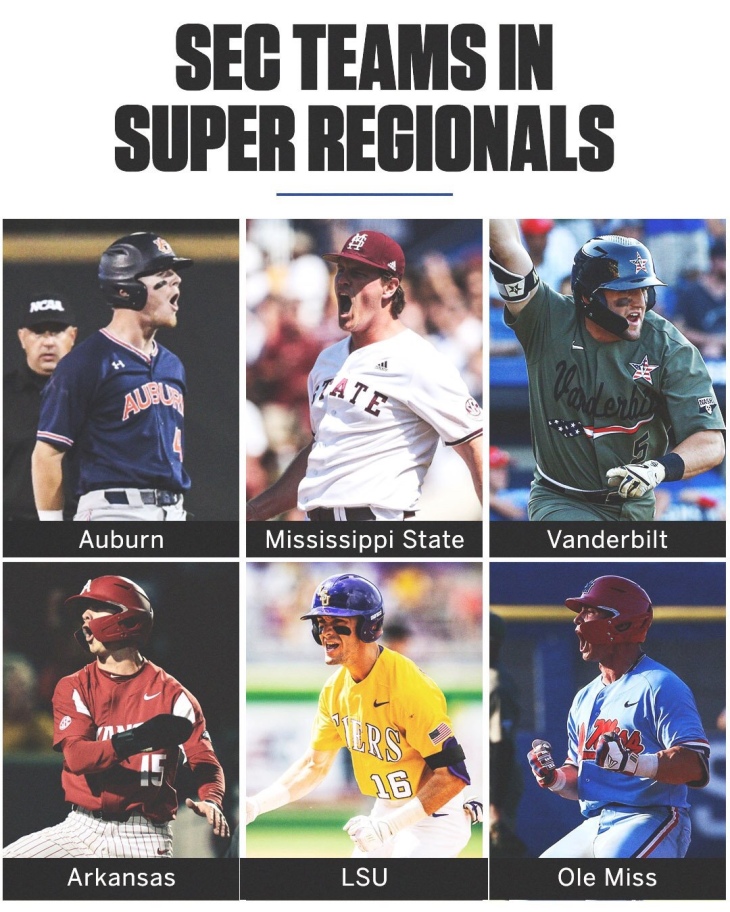 This past week was a tough one for Auburn fans, students, student-athletes and the community of Auburn. Friday afternoon, a day after longtime Voice of the Auburn Tigers, Rod Bramblett and his wife Paula’s funeral, the Auburn Tigers’ baseball team traveled east to Georgia Tech’s Russ Chandler Stadium for the Atlanta Regional. Auburn out-slugged their first opponent on Friday in the Coastal Carolina Chanticleers, 16-7. Then came the Saturday night come-from-behind thriller that was 1-seed Georgia Tech vs. 2-seed Auburn. The Yellow Jackets had a 5-3 lead in the bottom of the ninth with two runners on base as Auburn’s Steven Williams began to stride toward the plate. Before we knew it, Auburn was down their last strike and potentially about to land in the loser’s bracket. However, Steven Williams had something else on his mind as he belted a 3-run home run over the right field wall at Russ Chandler Stadium and Auburn walked off victorious. This was the first time Auburn had hit a postseason walk-off homer since, David Ross did so in 1997 to walk-off against Florida State and eventually lead the Tigers to the College World Series. Then came Sunday, a game that Auburn needed to win to secure a spot in their second consecutive .Super Regional. The Tigers were set for a rematch with the Georgia Tech Yellow Jackets. Late in the game, the Tigers were up 3-1, when none other than Steven Williams knocked home the sealing run. Following the game, Auburn head coach, Butch Thompson, was in the midst of tears as he said “Rod was with us, he had our backs.” The Tigers will head to Chapel Hill, North Carolina to take on the North Carolina Tar Heels in a best-of- three series June 7-10, the winner earns a trip to Omaha. They did it with purpose. They did it for Rod. 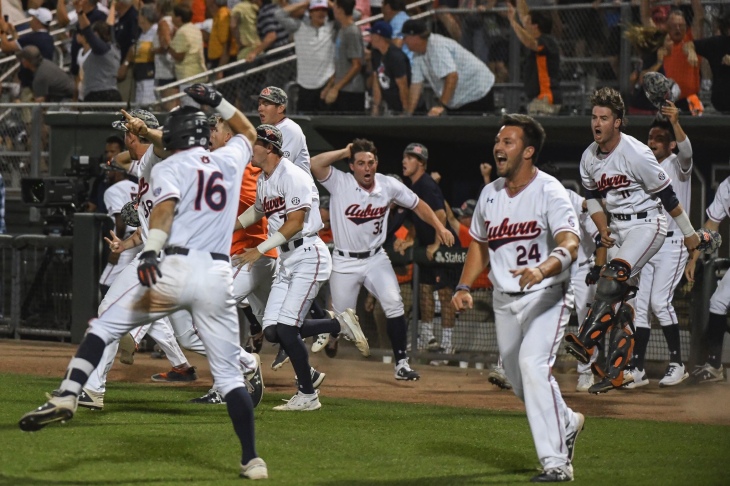