Ahh Turner Field, the place where I first saw Chipper Jones in person and where I spent more summer days in the sweltering Georgia heat. In the early 2000’s I had gone to visit relatives that live in Georgia with my parents. While in Georgia, we decided to catch a Braves game which I had only seen on TV at the time. Back in those days Vinny Castilla was the third baseman, Chipper Jones, who later moved in to play third, Rafael Furcal was the shortstop with insanely athletic movements. Andruw Jones was in center field, Javy Lopez, the catcher, Bobby Cox, the manager etc. as I mentioned before I had only seen them play on TV but I had spent many years studying the players and the game. So I was anxious to finally catch a game in person. The morning of the game, I jumped from the bed in excitement as I knew today was the day that I had waited on my entire lifetime. Atlanta was playing their arch-rival the New York Mets and as a Braves fan, it’s only right to hate “the team from Queens.” I still don’t like them to this day. When we pulled up and I saw the Turner Field marquee in the distance, chills were sent down my spine. Then we pulled our car into the parking lot and immediately I blurted out the ESPN SportsCenter theme. You know, the highlight song. In fact, that day Chipper Jones, my favorite player, hit a home run over the center field wall that measured 400 feet from home plate that gave the Braves a lead that they would not relinquish. In 2016 however, Turner Field stopped operating as the home of the Atlanta Braves, it serves the Georgia State University Panthers football program as their home field. That place is where I met so many people and had so many memories that I will cherish for a lifetime. Like that one time in 2013, when I met legendary Braves usher Walter Banks who has served as an usher for the Braves since they moved to Atlanta from Milwaukee in 1966. In fact, he can tell you anything you want to know about the Braves just by being asked about a number. The Braves have since moved to Cobb County, Georgia and SunTrust Park, which I intend to visit in the near future. They say every good thing must come to an end. But to me, Turner Field will always be the Home of the Braves. So long, old friend thanks for the many, many memories.

Next entry: The Time I Named My Dog after Chipper Jones. 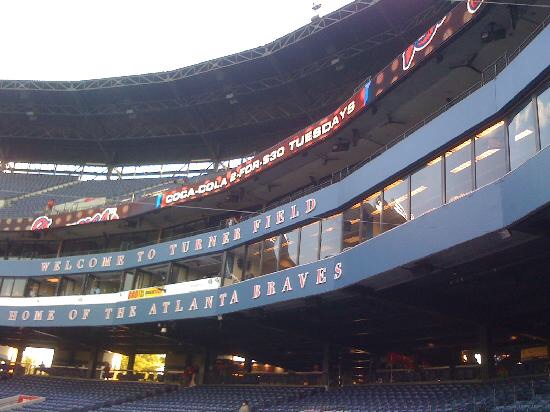